Climate change, as described in a very extensive risk research by European financial institutions ("The Green Swan" Jan 2020; Banque de France), represents an unprecedented challenge for the governance of global socio-economic and also financial systems. Our current production and consumption patterns cause significantly excessive emissions of greenhouse gases (GHG), in particular carbon dioxide (CO2): their accumulated concentration in the atmosphere above critical thresholds is increasingly recognised as being beyond the absorption and recycling capabilities of our ecosystem. The continuing rise in temperature has already begun to have a significant impact on our ecosystems and socio-economic systems around the world (IPCC (2018), Mora et al (2018)). Alarmingly, climate scientists are pointing out that the worst effects are still to come.

These include rising sea levels, the increase in extreme weather events, crop failures, droughts, drinking water shortages, floods and soil erosion. The associated impacts could include massive extinction in the plant and animal kingdoms as well as a sharp increase in human migration, resulting conflicts, poverty and a further significant increase in local inequality in the quality of human life (Human Rights Council (2019), IPCC (2018), Masson-Delmotte and Moufouma-Okia (2019), Ripple et al (2019)). Scientists therefore urgently recommend that greenhouse gas emissions be significantly reduced with immediate effect (Lenton et al (2019), Ripple et al (2019)). In this respect, the United Nations Climate Change Conference in 2015 (COP21) and the resulting Paris agreement between 196 countries to reduce GHG emissions at global level was a major political achievement.

In the Paris Convention (UNFCCC (2015)), the signatory states commit themselves to reduce greenhouse gas emissions "as soon as possible" and to do their best to keep global warming "well below 2 degrees" Celsius (2°C), with the aim of limiting the increase to 1.5°C. But since then, global emissions have continued to rise (Figueres et al. (2018))1 and there is no evidence that this trend is reversing. The production of coal, oil and gas already planned by countries is incompatible with limiting warming to 1.5°C or 2°C, creating a "production gap", a discrepancy between government plans and coherent decarbonization paths (SEI et al. (2019)).

Changing our production and consumption patterns and lifestyles in order to make the transition to a low-carbon economy is the only way out, but it is also a difficult problem of collective action. There is still considerable uncertainty about the effects of climate change and about the most urgent priorities. There will be few winners and probably many more losers in reducing climate change. But are we among the winners? Who knows? Shouldn't each of us make a much greater contribution to avert the "worst" and give our children and grandchildren a better future than that which is currently emerging?

There are long time lags before climate damage becomes visible and irreversible (in particular, this plays into the hands of climate sceptics): the most harmful effects will be felt beyond the traditionally perceived time horizons of policy makers and other economic and financial decision-makers. Mark Carney (2015), for example, described this as "the tragedy of the horizon": While the physical effects of climate change will be felt over a long-term horizon, with massive costs and possible civilising effects on future generations, the time horizon in which financial, economic and political actors plan and act is incomparably shorter. Sir David Frederick Attenborough, a distinguished natural scientist and science journalist, aptly described: " What we experience in the next 500 years will be determined by our actions in the next 10 years." (BBC, Cambrige University, The Climate Crisis; Towards Zero Carbon, 2020)

What is to be done, then?

A high-tech company based in the south of Cologne, with its production site in Kerpen (Rheinl.), was founded years ago as a spin-off of the renowned RWTH Aachen University and set out to develop and distribute product solutions to avoid waste in the use of operating materials in industrial production.

In 2018, the company received the German innovation award TOP 100 for its efforts, making it one of the 100 most innovative medium-sized companies in Germany. In 2020, the Grindaix GmbH, led by its main shareholder Dirk Friedrich, received this innovation award for the second time in two years. 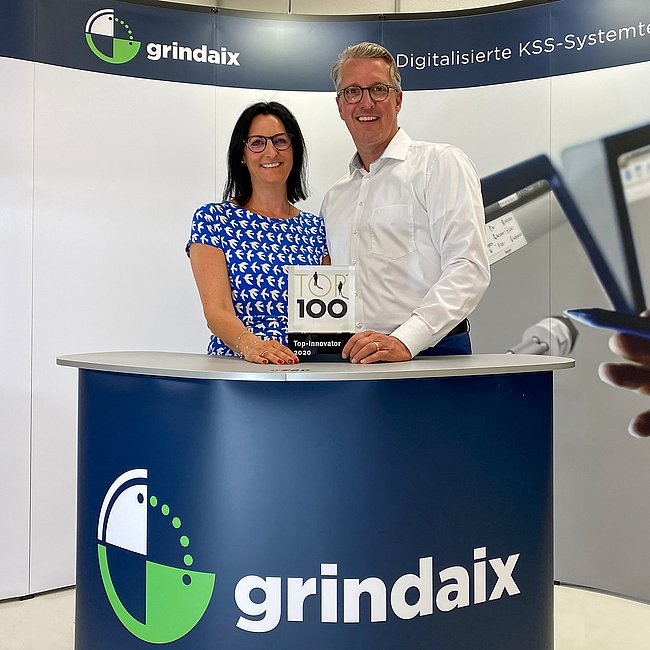 Award ceremony TOP 100 - 2020 - The team Grindaix, here representative the married couple Friedrich, belongs to the most innovative medium-sized companies in Germany - and this already for the 2nd time after 2018.

In a very short time, employees of Grindaix developed a modular and easily scalable data acquisition system for the simple but professional digitization of older existing machines in industrial production facilities. The technicians and engineers did not specialize in one industry, but the digital monitoring system can be used effectively in all industries.

Once the data on all machines have been recorded in a standardized data format and time stamp, they can be successfully used and utilized by software-based assistance systems ("artificial intelligence") for machine learning. Errors can be detected at an early stage - keyword: "predictive maintenance"- and an unnecessarily high consumption of natural resources can be avoided.

The complexity of the relationship between the requirements of all means of production for CO2-relevant resources, such as cooling water, oils, compressed air and electrical energy, and their effects on the production robustness of factories must be rated as extremely high. Such variably interacting correlations between a reduction in resource consumption and possible resulting production disadvantages, such as quality losses, cycle time extensions, etc., can only be successfully controlled with the help of artificially intelligent systems. However, one should not be afraid of this seemingly "all-powerful" artificial intelligence, because its capabilities are limited to only a small part of a production facility. As things stand today, artificial intelligence acts merely as an assistant, i.e. it makes recommendations, similar to a navigation system in a car, rather than deciding and acting itself. Where we ultimately go or what we produce is ultimately still decided by us humans.

The point in time of a technological singularity of artificially intelligent systems is the point in time at which the capabilities of artificial intelligence exceed those of humans in their range of application, and the latter can therefore improve or further develop themselves independently without humans having any influence on them. However, from a purely technical point of view, this point in time is very probably still in the distant future, if it occurs at all. It is a fact, however, that people urgently need help to be able to do the "right thing" from an ecological point of view - to protect the environment - to drastically reduce CO2 emissions, to weaken the effects of the looming climate catastrophe as much as possible in order to make the quality of life of people on our earth as liveable as possible.

Alone, he will probably not succeed, at least he has proven that over many years! The ecologically sustainable actions of a few individuals, mocked as "green" and often even laughed at for decades, will probably become the "saving straw" of entire nations in the future. Those who believe that economy and ecology cannot be reconciled in the future are mistaken. It is essential that the canon of values of economic action will change in the future. For those who do not believe this, the book by German economist Maja Göpel (Göpel 2020) is recommended. In any case, the ecological goals are indisputably fixed! We have to drastically reduce CO2 consumption or at least develop effective and affordable technologies in the short term that remove CO2 from the atmosphere in a sustainable and environmentally friendly way.

Unfortunately, it is no longer possible to "keep it up" if we assume that mankind does not want to completely destroy its living space. Unfortunately, most people are still not really aware of this. Then this report is an appeal, a good, in the sense of the common good, meant advice. For a change, let us take the unbiased advice of our children and start to follow it immediately.

Back to the magazine overview
To the next magazine article