In addition to the turbulence of the free jet, a distinction is made between the type of flow phenomenon. Since the surrounding medium of a cooling lubricant nozzle is still air, the free jet can be classified in the group of free turbulence. Figure 1 shows the principle structure of a free jet with its characteristic areas. [1,2,3]

Figure 1: Schematic representation of a turbulent free jet and its characteristic regions [4].

The free jet divides into several areas depending on the distance and position relative to the nozzle outlet. The following areas are distinguished:

The basic formation of a free jet can be divided into several points. First, the primary fluid (cooling lubricant) flows out of an opening into a secondary fluid (air) at a velocity c0.

The secondary fluid (air) is a stationary ambient medium without a sharp boundary surface. To be distinguished from this is wall turbulence where the environment is a fixed boundary without exchange. [1,2,3]

In the mixing zone, or transition zone, the secondary fluid increasingly mixes with the primary fluid of the nozzle. The velocity decreases hyperbolically with increasing distance from the outlet opening in the x-direction (see Figure 2). The decrease in velocity is caused by the internal friction of the fluid mixture. [1,2,3]

In the y-direction of the free jet, a velocity profile is formed according to a Gaussian normal distribution. The edge zone of the free jet has zero velocity and thus equals the velocity of the secondary fluid. Throughout the free jet, the pressure is ambient. [1,2,3]

The radiation decay of a cooling lubricant nozzle

Immediately after the free jet flows out of the nozzle at a defined velocity, it begins to decay. The fluid decay depends on several factors. These include:

These influencing variables determine the degree of atomization and thus the size distribution of the resulting droplets. In addition, the characteristic length of the core area is determined by these variables.

In the publication one distinguishes different decay mechanisms of the free beam.

These decay mechanisms have been experimentally recognized and defined. A distinction is made between the following: 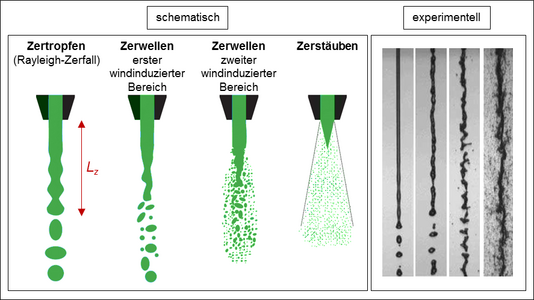 Figure 2: Types of radiation decay. On the left the schematic representation [5,7] and on the right experimentally determined.

The fluid cylinder exiting the nozzle is unstable and eventually leads to the pinching off of individual droplets due to axially symmetrical oscillations of the fluid surface. This decay mechanism is also called Rayleigh decay and occurs at very low flow velocities. The detached droplets are larger than the original jet diameter. The jet decay length Lz, i.e., the length relative to the nozzle exit from which the droplet detaches, is the longest of all decay mechanisms and decreases with increasing flow velocity. [5,6]

Waving of the cooling lubricant jet

If the flow velocity out of the nozzle is increased, the Rayleigh decay is accelerated by axially symmetrical oscillations. The droplets detach earlier from the fluid jet, resulting in smaller droplets of the size of the original jet diameter. Due to the earlier detachment of the droplets, the jet decay length Lz decreases. [5,6]

If the flow velocity is increased further, the Rayleigh decay is amplified and with it the axially symmetric oscillations. This leads to droplets that are smaller than the original jet diameter. The jet decay length Lz shifts further toward the nozzle exit. [5,6]

Atomization of the cooling lubricant jet

The droplet separation starts immediately after leaving the nozzle outlet. A spray of small droplets is formed. The size of the droplet size distribution varies greatly and is much smaller than the original jet diameter. Depending on the nozzle geometry, there may be a core area of free jet. [5,6]

Do you need support from an expert in this field? Then do not hesitate to contact us. We will analyze your grinding process and offer you an individual solution.

Back to the magazine overview
To the next magazine article

Climate change, as described in a very detailed risk research by the European financial institutions, poses an unprecedented challenge to the governance of global socio-economic and also financially acting systems.

Coolant monitoring systems can significantly contribute to increasing reliability and efficiency by collecting and evaluating a wide range of measurement and condition data in the coolant system.

Zero Emission Production helps to reduce carbon dioxide emissions permanently while at the same time increasing the availability of production resources and avoiding the waste of operating materials.

The digitization of production units offers a wide range of possibilities for networking existing machines and systems. In this article, we offer you a brief orientation in the subject matter.